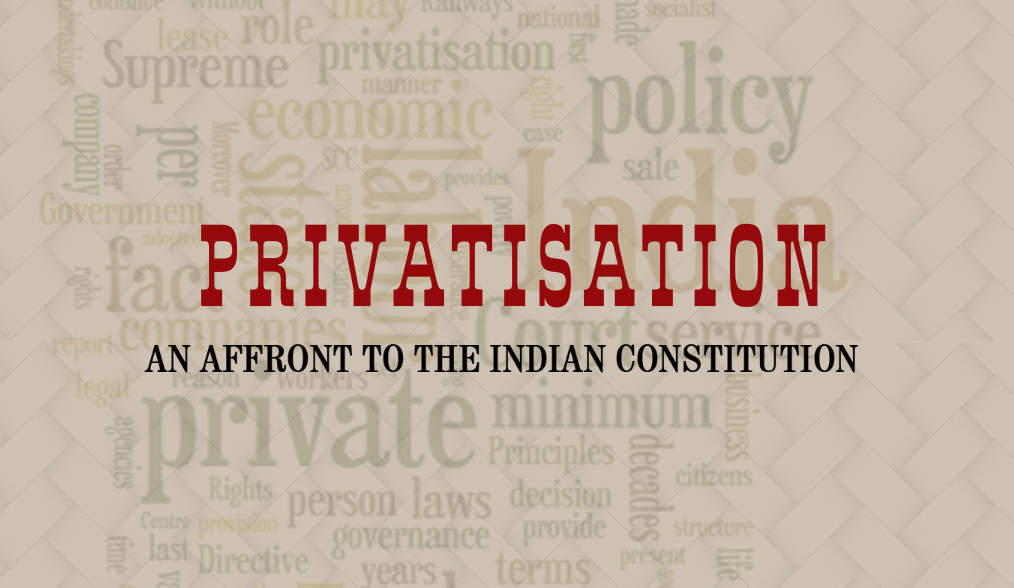 Public Sector Enterprises were to shoulder a vital role in economic development of independent India in accordance with the letter and the spirit of the Constitution, especially consistent with the State’s mandate stipulated in the Directive Principles.

There was a virtual consensus cutting across not only political but also economic interests in the national movement regarding the need for a vibrant public sector. The leading business houses realised the historical limitations that circumscribed their resource mobilisation capabilities in the post-colonial period. The potential for colonial primitive accumulation and markets that the European capitalists enjoyed in the period of their ascendence was foreclosed. In these circumstances the celebrated Bombay Plan (1944) drawn up by the representatives of business interests underlined the need for vigorous state intervention to promote industrialisation and setting up of public sector units that would establish basic infrastructure and long gestation basic industries that required heavy investment. The document also accepted planning so that the scarce resources are effectively deployed. The state was also to institute an appropriate regulatory framework for an import substitution strategy of development.

The regulation of imports directly flowed from the Swadeshi slogan of the national movement. India’s tryst with colonial free trade had been a terrible experience with the economy growing at around one per cent per annum, deindustrialisation, recurring famines and shrinkage of India’s share in global production. Given the abject poverty, illiteracy and ill-health of vast majority of the citizens who were also social victims of the legacy of caste discrimination, pursuit of social and economic justice was enshrined in the Directive Principles of the Constitution of India. These directives of the Constitution form the starting point of the analysis of the Interim Report 1 of the Peoples’ Commission on Public Sector and Public Services. The gist of the arguments in this opening initial report of the Peoples’ Commission is that the current policy of the Union Government for privatisation of the PSEs is tantamount to negation of the social objectives of the Constitution as stated in the Directive Principles and constitutional guarantees on affirmative action.

How did we come to this impasse? A successful import substitution strategy is predicated on continuous expansion of the domestic market. Among others, the most important was the failure to carry out land reforms and mitigate rural poverty. The attempt to change course to an export-oriented growth strategy in the 1980’s to accelerate growth ended in a major foreign exchange crisis. The country was forced to come to terms with Fund-Bank prescriptions and a new free market era of systematic dismantling of the post-independence economic regime was inaugurated in 1991.

India’s corporate interests were also fully convinced that the earlier regime had exhausted its potential for them. In fact, the Bombay Plan had not envisaged open ended growth of public sector or planning. As the corporates matured and gained experience, the public sector was to be eventually transferred to them or in other words privatised. In the changed global scenario, being part of the new international division of labour was inevitable and whatever loss of domestic market or opportunity was to be more than made good by the potential of primitive accumulation through privatisation of the public sector and monetisation of public assets.

The Indian developmental state has also meanwhile undergone profound transformation into a neoliberal state, a direct handmaiden of corporates and finance capital. Under the cover of Covid Pandemic, the unfinished neoliberal agenda in the financial sector, labour laws, privatisation and corporatisation of agriculture were also pushed through. Such has been the confidence that the laws were enacted mostly through the ordinance route by-passing Parliament and when finally placed in the Parliament, approved in hurried voice votes.

The year long struggle of the farmers protesting the three farm laws was a rude shock to the neoliberal state with most farmers rejecting their agenda. The labour laws are also in limbo. But the NDA government seems to be determined to push ahead with its privatisation agenda. One important reason is that it requires “non-debt-creating” receipts to fill the revenue gap in the budget which is getting out of hand because of tax concession to the corporates, capitalisation needs of the banks to make up for the NPAs of the corporates and payment for the more recent Production Linked Incentives Scheme. The Interim Report has pointed out that the macro-economic effect of such “non-debt-creating” receipts would be the same as a normal increase in the fiscal deficit if the private sector merely borrows funds from the banking sector. The macro-economic implications of privatisation are a set of issues that we would be taking up in one of the subsequent reports.

Facing a check-mate in the response to its farm agenda the Indian state is keen to demonstrate to international capital and Indian corporates their full commitment to the reform path. This in fact has been the general tenor of the corporate media after the farm laws fiasco. In this context the privatisation agenda would appear as low hanging fruits that can be easily plucked. For one, the government has succeeded in influencing middle class and public opinion through relentless propaganda that the public sector cannot be efficient and is a drain of government resources. Perhaps the resistance to privatisation has also started to suffer from fatigue. And the government through subterranean and ingenious measures are undermining the functioning of the existing public sector so that sooner or later there would be no alternative to privatisation . Such is the desperation of the government that they are willing to give extensive concessions to make privatisation attractive in the current forbidding macro-economic environment, even sacrificing the revenue objectives.

It is in this context that the Peoples’ Commission on Public Sector and Services which includes eminent academics, jurists, erstwhile administrators, trade unionists and social activists has been constituted. It is remarkable that the members of the Commission within a month of its constitution have through online consultations among themselves drawn up Interim Report 1, focusing more on the Constitutional aspects of the privatisation drive. We intend to have in-depth consultations with all stakeholders and other eminent people and produce several sectoral reports before coming out with a final report. This procedure has been adopted because of the urgent need for an informed public debate on privatisation and mobilising support for the resistance to such disastrous moves.

2 thoughts on “Privatisation: An Affront to the Indian Constitution”